FREE SHIPPING IN SINGAPORE
By December 27, 2019

How does PoE work? - PoE means One Click for Power, Networking and more!

PoE means One Click for Power, Networking and more! 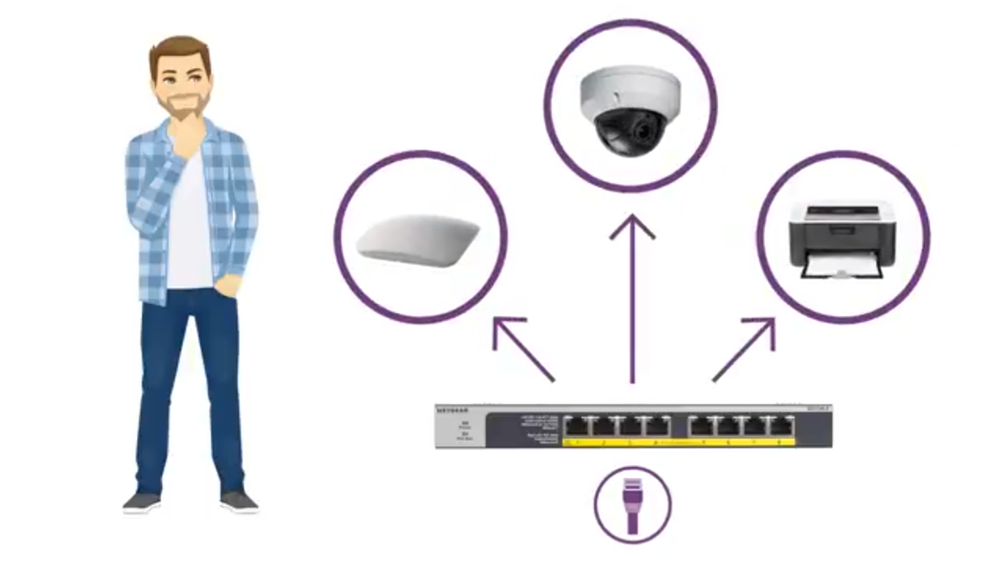 Wouldn’t it be great if you could plug a device into one cable into your network, then that device would be instantly powered, and connected to your Ethernet Network and be ready to go? With industry standard Power over Ethernet (or PoE) and PoE-capable devices, it's almost that easy!

But, why should a small businesses care about PoE?

Below are just a few benefits of PoE:

What exactly is PoE? Or “Wall-warts be gone”!

A standard non-poe Ethernet switch can send data using a very tiny amount of power using Ethernet cables. However, standard category Ethernet cables (sometimes called RJ45 or Cat5e, Cat6, Cat7 cables) have the amazing ability to handle and deliver much more power than is needed for standard data. PoE or Power over Ethernet is defined by the IEEE 802.3af or 802.3at standards. With a PoE Switch data and power are transport in an extremely safe and convenient way using safe 48v low-voltage DC power.  This energy is used to power devices via the cable, instead of only providing data. Now only one cable is needed, instead of needing a data cable and a wall-wart style power supply.

Say Watt? How much power can a PoE Device use?

PoE Comes in several classes that can provide power to devices that use a less than 4-15 Watts with Class 1-3 PoE (IP Phones, IP Cameras, low-powered Wireless APs) and to as much as 25+ watts with class 4 PoE+ (Wireless APs, Pan-tilt-zoom IP Cameras.  There are future classes 5-7+ of PoE++ on the horizon that can provide from 40 to 50+ watts of power. For a bit of perspective on this amount of power, a USB charging cable provides approx. 3-10 watts of power.

What devices does PoE Power?

How does a business deploy PoE?

Generally, the first thing you will want to do is source your PD’s or Powered Devices. This would usually be Wireless Access points, IP Cameras, IP Phones etc. The documentation for these devices should express the amount of power each device will need, or class they will be in. Each device will need its own PoE port on your switch (or switches) and the switch will need to be able to supply enough total power output to support your devices. The documentation on the switch will provide information on its total supplied power, and also power supplied per port.  One example would be the NETGEAR GS108PP PoE+ Switch – This switch is able to provide a total power budget of 123W with up to 30W per port across 8 Gigabit ports. This means you could have 4 ports with full 30w power budget, or 15 watts for 8 ports, or any combination in between, if you do not exceed the total power budget of the switch. Also understand that for PoE you will have a limit of 100m (328 feet) between the PoE Switch and the

powered device. Remember that only the Switch that the device is directly connected to will need to be a PoE Switch.

We highly recommend that you choose a network switch to power PoE Devices. But there are other options such as PoE Injectors. A PoE Injector is a device that “adds” power to a 1 or 2 ethernet via an external source power plug. While this is an option in many situations, the solution rarely scales well. There also may be concerns with security, quality assurance and sometimes even network performance.

Why choose NETGEAR for PoE deployments?

For one thing, NETGEAR’s huge selection of PoE switches! From small 5-port unmanaged PoE switches providing a few watts to one device, to huge 96-Port Managed Switches 10GB PoE+ Switches providing up to 1500 watts of PoE Power. Look for any NETGEAR switch with a letter “P” after the model number but before the hyphen (-), including “LP” and “PP”, is PoE-capable: for example, GS308P, GS728TPP, GS108LP etc. To find the PoE-capable switch that’s right for you, try the NETGEAR Switch Selector than Click the + next to Power over Ethernet (PoE) requirements.

Here are some great resources for those curious about PoE and want to research more.